The Utah Utes have brought back a coach from retirement to head up the offensive squad. Dennis Erickson has been on my different levels of the game from college all the way up to the NFL as a head coach. The experience is there and this would be a great groomer for Current OC Brian Johnson whom has had a short run at the throne the last few seasons. They will be Co- OC’s according to Whittingham and it’s still unclear who will have the finally decision. However the decision to bring on Dennis Erickson won’t hurt the Utes at all, it will bring some prestige to the program as well.

reports were made official when the Utes announced that Dennis Erickson had been hired as co-offensive coordinator Monday morning. He will officially start Feb. 19. 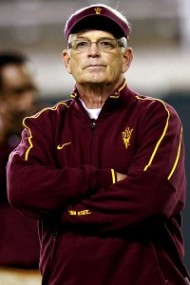 The Utes announce that Dennis Erickson will be part of the team next year.

AP Photo/Don RyanDennis Erickson, who won national titles in 1989 and ’91 at Miami, has also coached at Washington State, Oregon State and Arizona State.

Erickson, 65, who won national championships in 1989 and 1991 at Miami, has coached at three Pac-12 schools — Washington State, Oregon State and most recently Arizona State.

In total, he’s been head coach at six universities, and is the only coach to have won Pac-10 or Pac-12 Coach of the Year honors with three different schools.

“Dennis Erickson brings a wealth of knowledge and coaching experience to our program,” Whittingham said in a statement. “He has been labeled as one of the original architects of the spread and we are looking forward to the impact he will have on our offense. Coach Erickson also has recruiting connections across the country which should benefit us on that front as well.”